Lincoln Cathedral has been the defining building of this wonderful city for nearly a thousand years. Towering high on Lincoln’s high hill, the cathedral is a majestic centrepiece that can be seen for miles around in every direction. No matter where you happen to be in the city, the cathedral looms above watchfully. But how do you visit Lincoln Cathedral? What are the quirks you need to know before you go, and the hidden stories to look out for? We unpack everything in this quick but comprehensive visitors’ guide.

To find more ideas for your trip, see our complete guide to things to do in Lincoln.

This site contains links to some products and services we love, which we may make commission from at no extra cost to you.

What makes Lincoln Cathedral so special?

There are lots of cathedrals in the UK. Most cities have one. They are often fabulous buildings that represent some of the greatest architectural achievements in our history, but… let’s be honest here… visiting cathedrals and churches isn’t always the most riveting takeaway from a city stay. Unless you are a historical architecture buff, it can become a little repetitive.

However. A select few of our cathedrals in the UK have a little extra pizazz that make them stand out above the rest. St Paul’s, York and Salisbury are good examples; and Lincoln Cathedral absolutely counts among this number. But why?

First of all, Lincoln Cathedral has a remarkable back-story that makes it significant not only in this country, but on the worldwide stage. Did you know that it was the tallest building in the world for more than 200 years? (For more nuggets of city trivia, check out our rundown of cool facts about Lincoln.)

When an expansion was completed on the cathedral in 1311, the tip of its spire reached 159 metres, making it the tallest man-made structure on our planet. This surpassed the record that had been held by the Great Pyramid of Giza in Egypt for thousands of years. The cathedral then held this record until 1549, when its main spire collapsed in a storm; after this, it wasn’t until the completion of Ulm Minster in Germany in 1890 that another building surpassed the height of Lincoln Cathedral at its pomp.

Aside from its sheer size and architectural significance, Lincoln Cathedral has been at the crux of many events that have shaped British history. Many of the stories that have accumulated around the cathedral over the centuries can be discovered hidden away within its walls.

Two years after the Magna Carta was brought to Lincoln, the city became the focal point of fighting between the forces of King Henry III and Loui VIII of France. When they clashed in 1217 at the Second Battle of Lincoln, the cathedral was at the turning point of the day when high-ranking French knight Thomas du Perche was mortally wounded at the doors.

When the Magna Carta was published in 1215 – the document that laid the foundations of law and order in the UK – a copy was brought back to Lincoln by the city’s bishop, and has been owned by the cathedral ever since. Today, it is one of only four original copies that survive (although it is on permanent loan to nearby Lincoln Castle, where it can be seen when on display).

Did you know? As the owner of an original copy, Lincoln Cathedral traditionally hosts an annual Magna Carta Lecture, typically delivered by a high-profile dignitary or politician and exploring the history and impact of the charter.

Here is a lecture by former Bank of England Governor Mark Carney at Lincoln Cathedral in 2015 during the 800th anniversary celebrations:

It’s a symbol of home if you live here

For Lincoln locals, the cathedral is as much part of life’s furniture as the sofa in your living room. We can see it from almost anywhere in and around the city, around any corner we turn, as an ever-constant reminder that we are home.

Whether we’re out walking the dog in the evening along the river, shopping down the High Street or returning from a drive out into the countryside, the sight of the cathedral is a symbol of being home. It’s an especially impressive and comforting view at night when lit up against a dark sky, or at sunset when bathed in the last of the day’s light.

When you live in Lincoln, the cathedral becomes a part of your life. 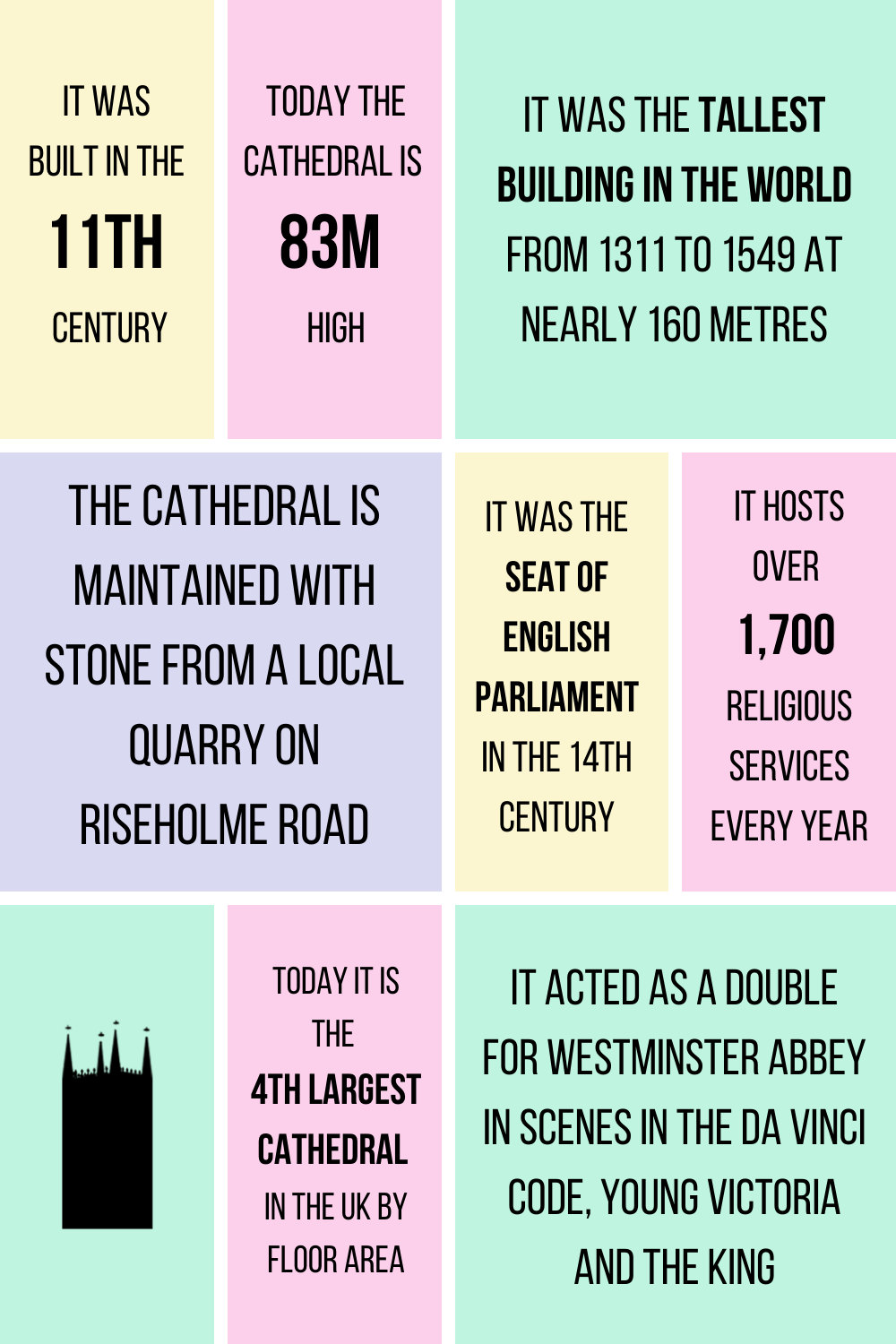 Things to see in Lincoln Cathedral

The splendour of Lincoln’s Cathedral’s interior provides more than enough to admire in itself, but there are also a few quirky and noteworthy features to keep an eye out for as you explore. Let’s take a look at some of the highlights…

A name synonymous with Lincoln Cathedral is that of St Hugh, the man who rebuilt it after a devastating earthquake in 1185. The French nobleman was a hero of the downtrodden, remembered for standing up for the poor, rejecting laws that would bring about starvation, and giving sanctuary to oppressed Jews in Lincoln and elsewhere in the UK.

When St Hugh died in 1200 he was buried in Lincoln Cathedral, his tomb becoming a shrine for pilgrims and worshippers over the centuries. The shrine still stands by the east window, more than 800 years after his passing.

You may have heard of the fabled Lincoln Imp as the inspiration behind the nickname of Lincoln City Football Club. The legendary little creature also lends its name to some of our favourite hang-out spots around the city, like the Imp & Angel micropub. But what exactly is the Lincoln Imp?

You will find the answer inside the cathedral… but you will need to look carefully. The Lincoln Imp is a grotesque inside the cathedral walls with a back-story that has worked its way into the city’s folklore. So the legend goes, the imp wreaked havoc and mischief around Lincoln, until the angels became fed up of it and turned him to stone.

The imp is perched at just above the pillar closest to St Hugh’s Shrine. Don’t worry if you can’t spot it – you can pay 20p to light him up using a coin-operated machine near the Blessed Virgin Mary statue.

In the summer months you can also find colourful imp sculptures all around the city on the Lincoln Imp Trail.

Ever wondered where Charing Cross in London gets its name? It was the last of a trail of crosses between Lincoln and London – known as the ‘Eleanor Crosses’ – erected as a memorial to Eleanor of Castile, who died just outside Lincoln on her way to the city.

Eleanor’s husband, King Edward ‘Longshanks’ I of England, had her body moved to London after her death, but he also wanted to leave a piece of her legacy in Lincoln. As was customary at the time, he had her vital organs removed, and then had them buried beneath Lincoln Cathedral.

Inside the Cathedral, Eleanor’s memory is marked with a duplicate of her Westminster Abbey tomb. It stands solemnly next to St Hugh’s Shrine.

The pipe organ is a classic feature of many a cathedral around the world. The elite among cathedrals in the UK are bestowed with organs built by Henry Willis, who was considered the greatest organ-builder of the Victorian era.

Over Willis’ lifetime he built over 1,000 organs, including those in the cathedrals of St Paul’s, Canterbury, Salisbury and Edinburgh. But the last organ he ever built – in 1898 – is Lincoln Cathedral’s. Constructed of some 4,000 pipes, this impressive instrument that continues to fill the cathedral with music is considered one of the finest organs in the UK.

Lincoln Cathedral is marked by two great circular stained-glass rose windows, facing each other on the north and south sides of the crossing. On the north side there is the Dean’s Eye, and on the south side the Bishop’s Eye.

Rose windows like these are a rare feature in English medieval architecture. The Bishop’s Eye is particularly impressive, originally built in the early 14th Century, and still containing fragments of medieval glass from the 16th Century.

There are only two libraries remaining in the UK built by the celebrated architect Christopher Wren; one is at Trinity College at the University of Cambridge, and the other at… you’ve guessed it… Lincoln Cathedral.

Today, the 17th-Century Wren Library at Lincoln holds a collection of over 10,000 works, including over 250 original medieval manuscripts. The cathedral libraries are currently closed due to Covid-19 restrictions; we’ll keep this page updated with updates on re-opening.

How to visit Lincoln Cathedral

You can book tickets for Lincoln Cathedral directly on the cathedral’s website. It is free to enter to attend services, but to explore the building as a tourist the fees are as follows:

If you are a UK taxpayer, you have the option to add Gift Aid to your admission fee, which means that charities can claim an extra 25% of your fee at no extra cost to you. If you do this you will receive an annual pass, and so can return to explore the cathedral again any time within the next 12 months.

When visiting the cathedral during normal times, there are various tours you can take to explore its intricacies, such as tower and roof tours (our favourite!), floor tours, library tours and historic graffiti tours.

These tours are not yet running amid Covid-19 concerns and restrictions. We’re keeping in touch with the cathedral and will update the information here once anything changes.

As part of major regeneration works at Lincoln Cathedral supported by £16.4 million of National Lottery funding, a new visitor centre has been unveiled in 2021 on the west side of the complex.

The fresh new space repurposes the old deanery building into a contemporary shop and café. With high-ceilinged rooms, ample windows and white-painted walls, the new facilities are spacious and full of light, looking out onto the revitalised Dean’s Green gardens.

You will also find the shop and café putting forward an array of local produce and talent. The walls are adorned with works by local artists, and in the shop you can buy illustrations and glassworks by popular Lincolnshire-based crafters. The shelves are stocked with jams, chutneys, artisan chocolate, gins and ales made by independent local businesses.

Read more about the new space in our review of the Lincoln Cathedral shop and café.

Lincoln Cathedral is open seven days a week, from 10am–4pm Monday to Saturday and 11am–3.30pm on Sundays.

How to get to Lincoln Cathedral

Such is the dominance of Lincoln Cathedral on the city’s skyline that it’s impossible to miss when visiting. The entrance point is located in the heart of the uphill area, about 15–20 minutes’ walk from the train station. You can see the cathedral’s precise location on the map below:

The closest car parks to the cathedral are:

Each of these is less than ten minutes’ walk away and priced similarly, around £5 for three hours. You can find the full range of car parking options and price information on the City Council website.

As the cathedral is Lincoln’s central landmark, naturally there is a good choice of places to stay nearby. These are some of our favourite hotels close to the building:

For more ideas, read our guides to places to stay in Lincoln.

There is no shortage of good places to eat near Lincoln Cathedral, with the uphill area featuring some of the best restaurants, cafés and pubs in the city. These are our picks of the best:

For something different, check out our rundown of Lincoln’s best tea rooms, several of which are in close vicinity of the cathedral.

Have you visited Lincoln cathedral? Let us know about your experience in the comments below.

Love this guide? Pin it for later!